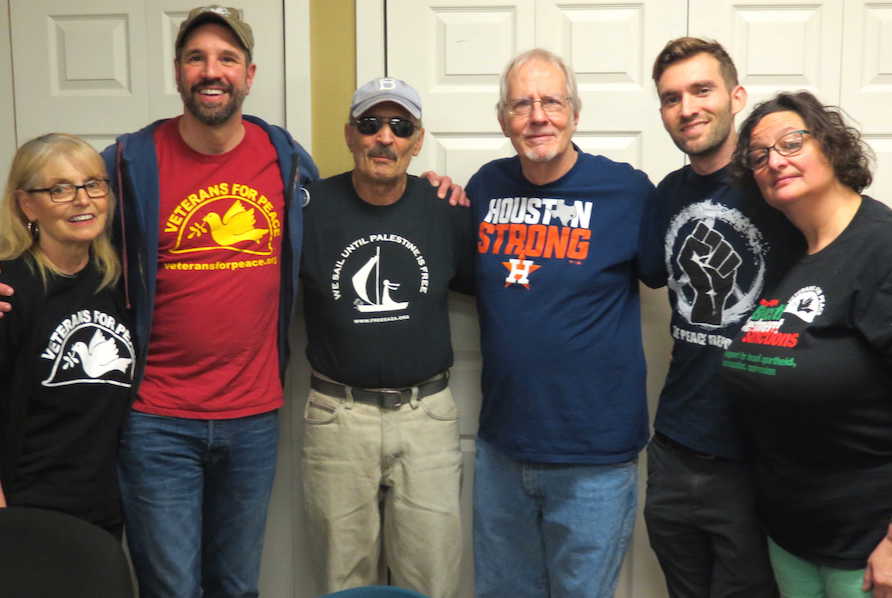 A nine-person Veterans for Peace delegation visited Palestine/Israel earlier this year. While there, they met with Palestinian popular resistance leaders as well as members of the Knesset. They participated in nonviolent direct action and witnessed the resiliency, solidarity, creativity, and courage of the Palestinian resistance to the Israeli occupation and the settlements that steal their land, water, and other resources. Four members of that delegation join Thorne Dreyer on Rag Radio.

Photographer Ellen Davidson, former State Department official and USMC Captain Matthew Hoh, former U.S Army paratrooper Tarak Kauff, and filmmaker Chris Smiley are touring Texas to tell us what they observed first-hand. Among them, they have traveled to Palestine, Ferguson, Standing Rock, Jeju Island, and Okinawa -- and will visit the US/Mexico border this fall -- to witness and support oppressed communities.

Ellen Davidson is a journalist, photographer, and longtime peace and justice activist. She is an editor of Peace in Our Times and of the New York City-based Indypendent. She has co-led Veterans For Peace delegations to the West Bank, where she has traveled extensively. She is the co-director of the VFP Chorus.

Matthew Hoh is a Senior Fellow at the Center for International Policy and former director of the Afghanistan Study Group, advocating for change in U.S. strategy in Afghanistan. A former State Department official, Matt resigned in protest from his post in Afghanistan in 2009 over U.S. strategic policy and goals. Matthew served in Iraq in 2004-2005 in Salah ad Din Province and in 2006-2007 in Anbar Province as a Captain in the USMC. He is a member of the advisory boards of Expose Facts, World Beyond War, and Veterans for Peace.

Tarak Kauff served in the U.S. Army as a paratrooper from 1959 to 1962. He has been a member of the Veterans For Peace Board of Directors for the past five years. Tarak has held a lead role in VFP's Direct Action Team, organizing and leading actions at the National Archives, the Vietnam Veterans Memorial, and multiple actions at the White House. He took part in the Gaza Freedom March in Cairo. He is the managing editor of Peace in Our Times, VFP's quarterly newspaper.

Chris Smiley is a professional filmmaker and associate member of Veterans For Peace who filmed the delegation to Palestine and is in the process of making a docu-series about the trip.Rag Radio is produced in the studios of KOOP 91.7-FM, an all-volunteer, cooperatively-run, solar-powered community radio station in Austin, Texas, in association with The Rag Blog and the New Journalism Project, a Texas 501(c)(3) nonprofit. The host and producer of Rag Radio, Thorne Dreyer, is a prominent Austin-based activist and writer who was a pioneer of the ’60s underground press movement. The show’s engineer and co-producer is Tracey Schulz and the staff photographer is Roger Baker. The syndicated show is broadcast (andstreamed) live Fridays, 2-3 p.m. (Central) on KOOP, and is later rebroadcast and streamed on WFTE-FM in Mt. Cobb and Scranton, PA., on Houston Pacifica's KPFT HD-3 90.1, and by KKRN, 88.5-FM in Round Mountain, CA -- and as a featured podcast at Veterans Today.